Infrequent writings on the more technical aspects of search engine optimization. Aimed towards the more intermediate and advanced online marketeer.

Like many webmasters, I sometimes obsess a bit too much on how my webpage will show up in the search engines. To turn Google searches into visitors, I tweak and fine-tune my <title> and <meta name="description"> tags so that they’ll stand out in the search result pages.

To do this I use a Google SERP Preview tool. There are many great options out there, from SEOmofo’s iconic tinkling lad to the polished tool from Mangools. But they were never 100% to my liking. I wanted to be able to see both a mobile and desktop preview, something clean and not too opinionated. After severely underestimating how much work it would be, I decided to build one to my own liking. Some 65 commits later —dozens of JavaScript and responsive CSS woes— I can introduce to you: SERPcomposer.com 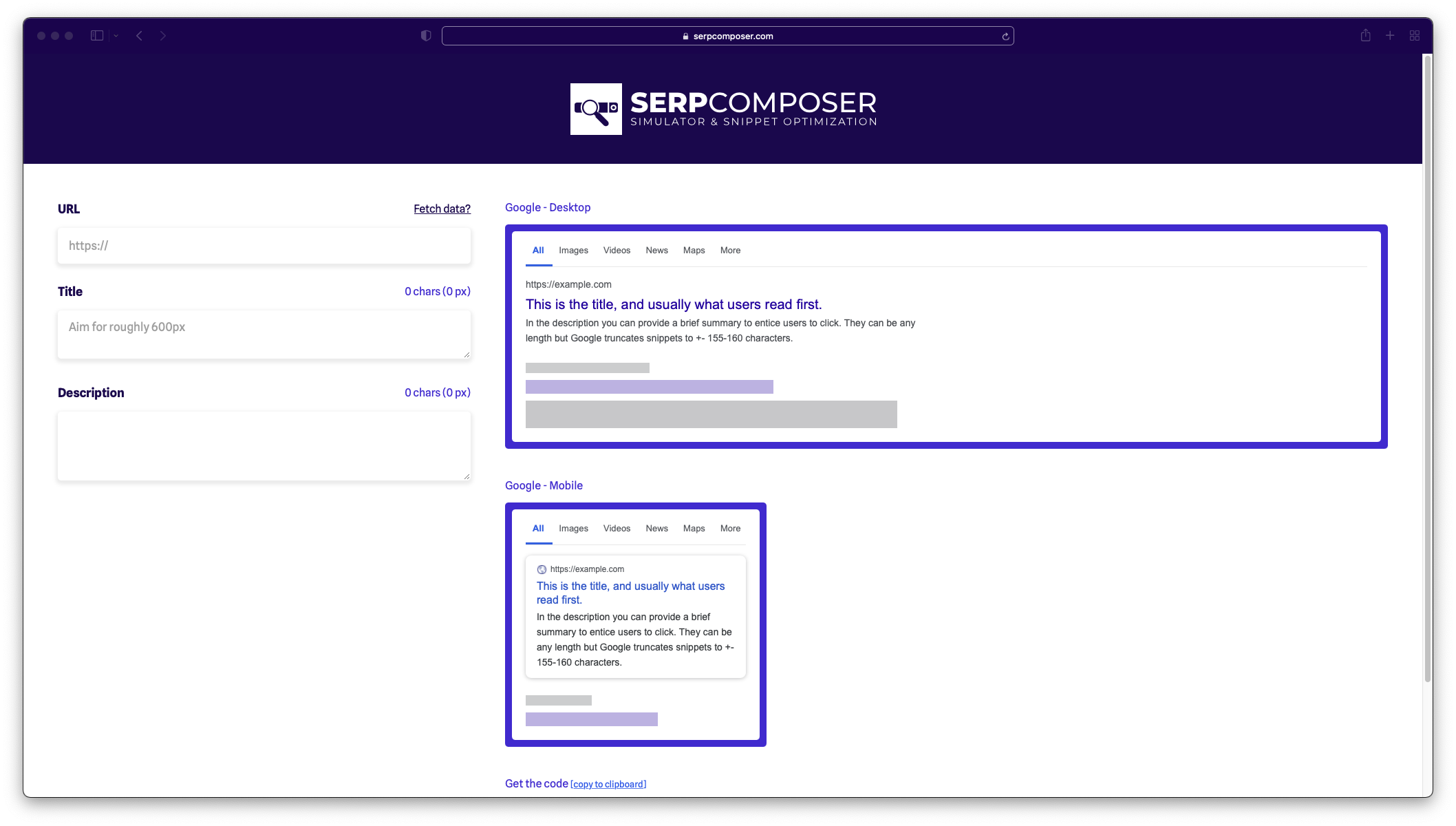 “There are many like it, but this one is mine”. Give it a whirl next time you’re optimizing your tags, I think you’ll like it as well:

Thanks to Kreativlab for the logo and Kimberly Nijzink for the brand identity.

I’ve developed a teeny little browser extension called Google SERP Counter. It does only one thing: It adds the position of a result next to the search results on Google. This is what that looks like:

The extension supports variable results per pages and keeps track of the last visited page to display the correct count.

Best way to use it? 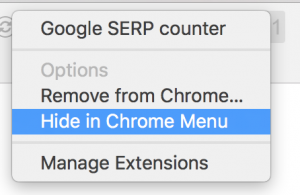 In your Google Search Settings you can change how many results display per page. I have it set at the highest of 100 per page. In chrome://extensions/ you can also tick the “Allow in incognito” box (Extension contains no tracking scripts) so it works in Incognito mode. Lastly, you might want to right-click on the extension icon in the Omnibar and click “Hide in Chrome Menu”.

Now that you are all set-up you’ll never have to count again! This is especially useful when analyzing SERPs, and you’ve jumped halfway down the page with a “Find” command.

UPDATE: This extension has been deprecated as off 2022-07-04. Thanks for using my extension these years!

Usually when there is a question mark in the title of an article the answer is no. In this case the answer is probably yes. But with most things in SEO it’s hard to give a firm confirmation. In this post I’ll look at the arguments for and against comments being a ranking factor.

To be clear; I’m talking about blogs allowing comments on article. Not the linkbuilding tactic. Assuming the site doesn’t publish obvious spam comments would this actually help a website rank higher?

Argument FOR comments being a ranking factor

Jennifer Slegg from TheSEMPost basically asked this exact question to Garry Illyes (@methode) from Google. In response Garry said that comments show there is a community on a website. And a “healthy thriving community” is an indication of quality. Which in turn is a positive ranking signal for Google.

In general if we see that there’s a healthy, thriving community on a site, that can help a lot […] it feeds into general quality. Say, there’s good content, 5 points, great links from great pages, 2 points, thriving community, 1pt […] that wasn’t a stack rank. The points I gave are random

2) It increases the word count of the page

Please don’t understand me wrong — I’m not suggesting word count is a ranking factor. But it has been well researched* that longer content tends to rank higher. This is a case of longer content being on average better quality and therefor performing better (correlation).

If a search engine is evaluating content for quality they look at things like topical strength, relevance, synonyms, reading level and outgoing links (and citations). Comments can all help with this since comments will usually phrase things in a different way, ask relevant questions and use a different tone of voice. More words = more longtail content.

* A study done by Ahrefs showed a very positive correlation to longer form content and research from Backlinko showed a similar trend.

Arguments AGAINST comments being a ranking factor

Besides the confirmation by Google no independent ranking factor study has ever mentioned blog comments. There have been plenty of studies on ranking factors by companies such as Moz, Ahrefs and Semrush. Not once have studies on millions of websites and queries found a correlation between blog comments and rankings.

Of course this doesn’t completely rule out comments as ranking factor. After all, it’s hard to find something if you’re not looking for it. But many smart marketeers and webmasters are looking for an advantage in the SERPS and none of them have found and published extensive proof.

If not properly moderated, internet comments are known to be low quality. This includes comments that don’t add anything to the conversation (“Great post!”) but also actual low quality content with grammar and spelling errors.

A common SEO strategy is to prune out thin and low quality content because this might help other pages rank. Wouldn’t the average comment bring down the quality of a page?

There is a good reason search engines are so secretive about ranking factors. Webmasters are known to abuse methods to the extreme to gain an advantage in Google. This has been the case with most link building tactics, on-page information like <h1>‘s and even the massive growth of HTTPs can partially be attributed to Google making it a minor ranking factor. It’s not hard to imagine that search engines shy away from easy to abuse ranking signals.

Comments would be a very easy to abuse ranking factor. Any webmaster can load fake comments into their database and make them look slightly plausible.

A site having an active community is a good metric of quality. But comments are far from the best way to test that. Even the most active blogs don’t get more than 1 to 5 percent of readers commenting.

A far better way to see if there is a community? Social media. Most sites and business are active on social media. Seeing how much activity their updates get is a great way to tell the credibility of a site. The reason search engines (probably) don’t do this is because of again how easy to abuse it is.

Bonus: Turning off comments will lead to more social signals

On this blog I specifically chose to turn of comments because I wanted to move the conversation to Twitter. Not so much for a ranking reason but an increase in social signals (shares, replies) might be a ranking factor on it’s own.

Lets speculate and say a big blog turns off comments (losing a potential ranking boost) and instead encourages social sharing. Even if this only increases shares by 10% this increase could negate the loss and be a bigger ranking signal on its own. Of course social signals being a ranking factor is a much debated topic on its own.

Before writing this article and doing this research I thought the idea of comments being a ranking factor laughable. I’ve changed my mind. When done right comments I believe comments give a positive ranking signal. How much weight it has? That’s an even harder question to answer.

Cryptocurrencies are very interesting to follow. Not only because it’s the future of payments but also because it’s still in relative early stages.

If you look at the average altcoin website you’ll find a technical website filled with jargon and without a clear unique selling proposition. You’ll be lucky to find a technical whitepaper and a link to the BitcoinTalk page. It’s certainly not targeted towards the ‘beginner’ in the crypto world and instead to other developers and power users. Plenty of room to improve in the coming years if you ask me.

This also shows in the choice for top level domain names. While most business would rather change the name than register an .info this is not uncommon for cryptocurrencies. To see if there are some more uncommon TLD’s in the crypto world I put together a list of the most popular extensions based on coins found on CoinMarketCap.

END_OF_DOCUMENT_TOKEN_TO_BE_REPLACED

Building internal links is one of those great “quick wins”. Exactly like external backlinks they help search engines know what pages are important.

This way of link building is especially important for Ecommerce websites. It’s hard to get people to link to your products, so why not create your own links? Here’s some ideas you can use that will help you sell more products, help customers find the right products and build relevant (internal) links while doing it.

END_OF_DOCUMENT_TOKEN_TO_BE_REPLACED

For a potential clients website I wanted to check the XML sitemap for errors. I had a suspicion the file contained links to that no longer worked (301 redirects and 404 errors) but without having access to the Search Console I had no quick way to check. 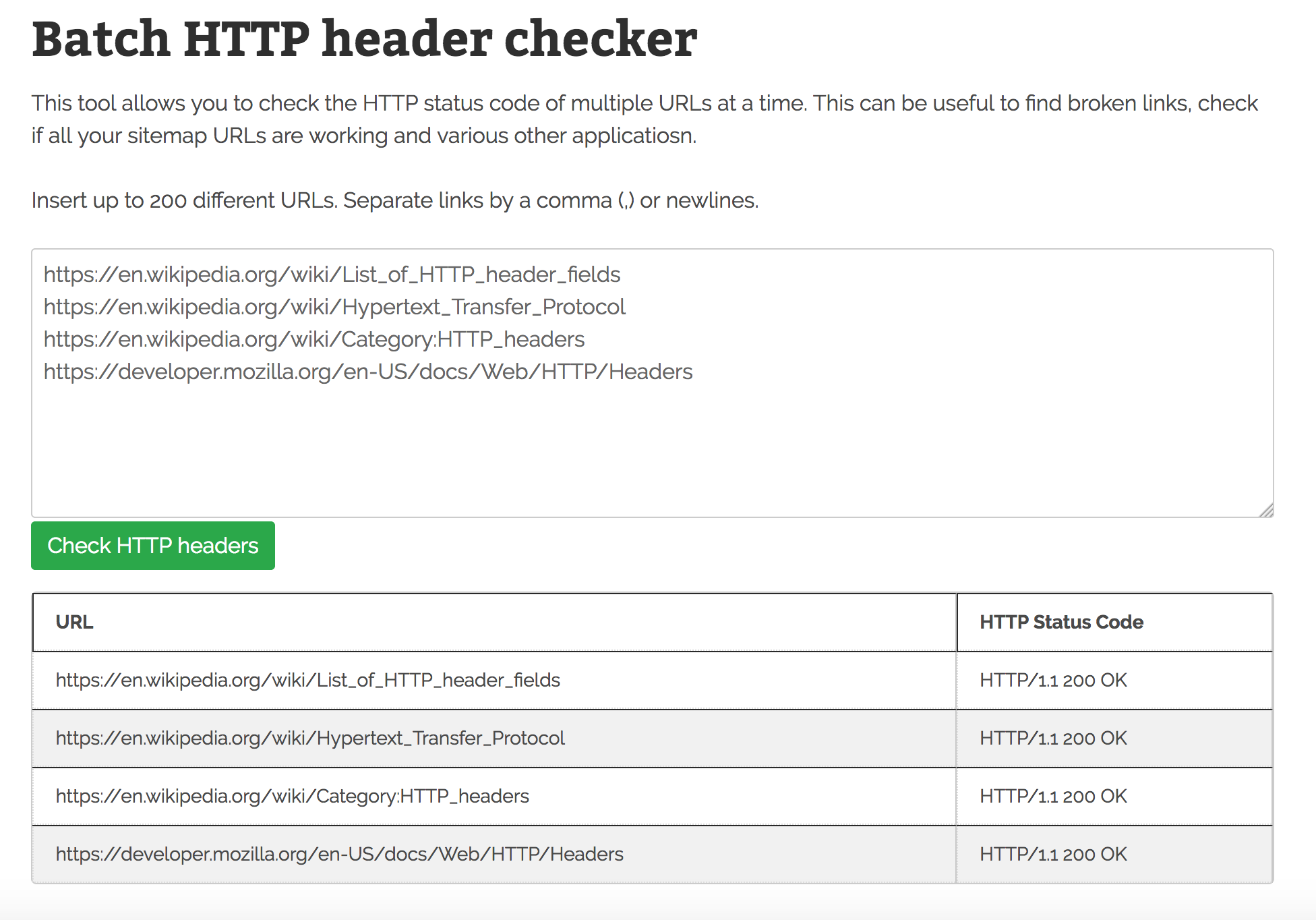 To solve this I wrote some PHP code to get the HTTP request headers of an array of URLs. I thought someone else might find it useful so after polishing it a bit I published it online.

You probably have event tracking set up for filling out a contact form but many websites also contain direct mailto: and tel: links. Customers that pick up the phone and call are usually very valuable but can be hard to track. With some Javascript you can very easily track these conversions in Google Analytics.

I’ve found this to be a great metric to track on sites that contain site-wide (e.g. footer) links with direct contact methods. With client work it’s become default to set up conversions for these mailto: and tel: clicks. Here’s how you can do it as well.

END_OF_DOCUMENT_TOKEN_TO_BE_REPLACED

This is a “from beginner to advanced” guide to /robots.txt. Each instruction contains advice on common mistakes and pitfalls. Written for beginning SEOs and marketers but full of helpful info for people from all knowledge levels.